Here’s the pitch: any Lyft or Uber can become a “Cash Cab.” Except in Bethesda-based Play Octopus‘ twist on the Discovery Channel tv show with surprise games en route to a destination, both the passenger and driver can get money.

Ride-hail drivers earn up to $100 per month for putting Octopus tablets in their backseats and letting passengers play games mixed with ads or games that are themselves branded. Passengers can win money playing those games. And advertisers including Disney, National Geographic, Target, Red Bull and Sprint win precious information to help them to develop ever-more targeted marketing and to measure the impact of their current messaging.

Where claiming a coupon, promotion or free product requires a passenger to enter one, firms can even instantly collect a phone number or email address from a ride-hail vehicle they can simultaneously watch on a real-time map. The 10-month-old startup’s roadshow video touts the platform’s capacity to cull 50 data points from a vehicle every two minutes, including location, whether a tablet’s sound was on, the speed the vehicle was traveling, how a passenger engaged with a tablet, who was driving and more.

Octopus calculates the average ride-hail trip at 13 minutes and says that 35 to 50% of passengers will engage with the tablet in some way. 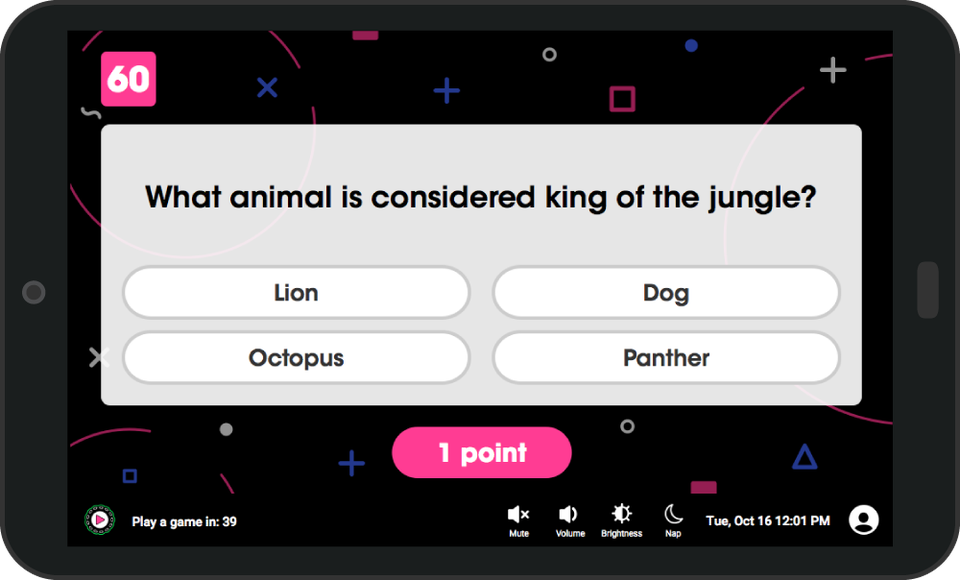 The no-brainer trivia games with prizes that bait passengers into a wordless, data-rich focus group on wheels make Octopus’ spreading tentacles a bit scary. The company is preparing a national expansion, moving from its East Coast origins into Austin and Houston next month, before arriving in Los Angeles, San Francisco, Chicago and 10 more unannounced cities launch later this year.

While it appears to be the most intense consumer analysis fishbowl yet, it’s not the first geotargeted ride-hail advertising concept on the road. It follows Vugo in tablet-based “contextual” content, meaning ads relevant to location. Firefly‘s version of geotargeting flashes messages out into the street from a rooftop display, rather than entertain passengers on a tablet inside the vehicle.

Octopus also has competition in Ivee. That startup is creating brand-conscious memories in the backseat with its packaged experiencesdesigned to engage all five senses. This month in Los Angeles, for example, passengers could hail an Uber that is a moving relaxation pod. That pod soothes with calming music, pleasant aromatherapy, flavorful tea and relaxing massage.

All three companies, like Octopus, offer drivers a way to earn a bit more on each ride. This video shows how Octopus appeals to drivers and what comes in the onboarding package:

Will those drivers get excited about Octopus, with all the other ways to side hustle their side hustles? The country’s unofficial ride-hail driver’s consultant Harry Campbell, also known as The Rideshare Guy, said via email, “There’s definitely some tablet fatigue with rideshare drivers these days since so many companies have come and gone.” Campbell is a paid advisor to Vugo.

Octopus says its driver numbers are strong, shipping over 1,000 new tablets every month to drivers in its six current East Coast markets alone. The company determines its next locations by advertising inventory and so is planning a methodical rollout in select cities, but Octopus cofounder and Chief Executive Cherian Thomas reports organic requests from every state. He attributes this to strong word-of-mouth, which accounts for about 50% of new driver registrations.

The other half of Octopus’ signups come from about 25% digital advertising and 25% third-party referrals. All drivers average a 4.7-star rating on their respective transportation network companies’ platforms (TNCs).

New drivers must be well-rated and drive at least 100 rides a month for the tablet investment to make economic sense for Octopus, Thomas said in a phone interview.

The company started with frustration at its now-parent Spotluck. The restaurant app spent on”out-of-home”(OOH) or outdoor mediaadvertising but couldn’t tell where that advertising landed. More ad buys didn’t produce more engagement, which wasn’t effectively measured anyway. Octopus was created to mix user analysis into ad delivery in the OOH space.

Beta testing under the Spotluck brand in Philadelphia in 2017 prepared Thomas and his cofounder Bradford Sayler for hard launch as Octopus in Bethesda in March 2018. Washington D.C., Richmond, Baltimore, Philadelphia, Boston and New York followed during the year. A September seed round raised $3 million.

Thomas declined to discuss current profit margin but said that the company is profitable and increasing new driver registrations by more than 35% month-over-month and seeing increases in user engagement by over 40% per month.

Next, the company will focus on its national expansion and continue to grow its new branded games while giving passengers options in their use of the tablet. “Choose your own entertainment,” Thomas said. “We give them an option of what they want to engage with.”

Copyright © 2020 Octopus Interactive. All Rights Reserved. Not affiliated with Uber or Lyft